Photo of Patrick Mullane, Executive Director of Harvard Business School Online and author of this article.

10 Mistakes Leaders Make (And How to Avoid Them)

Ten common leadership and management mistakes, including ideas on how to avoid them.

Humans make mistakes. And a leader, whose primary responsibility is decision-making, will make more mistakes than others. There’s no shame in that.

The good news is; any error you’ve made, or will make, has already been made by somebody else — myself included.

Below, I discuss common mistakes I’ve seen — most of which I’ve committed — and how to avoid them yourself.

If you’re a leader, your employees know that, so there’s no reason to remind them.

Your authority doesn’t come from your title; it comes from your behavior.

What sort of behavior?

This is something touched on by Jim Collins in his seminal book Good to Great.

In defining great leaders who have run exemplary companies, Collins makes this point:

[Great] leaders display a powerful mixture of personal humility and indomitable will. They’re incredibly ambitious, but their ambition is first and foremost for the cause, for the organization and its purpose, not themselves.

Collins’s take on what makes a great leader is also a guide for how to avoid this mistake.

Embrace humility even as you work hard toward an objective.

Make your ambition — no matter how great — about your organization, not about you.

Mistake 2: Holding on to somebody for too long

It’s been said that the sole role of a business leader is to allocate resources and hire the right people. Doing the latter is harder than it seems.

While there are things you can do to increase your chances of hiring the right person, mistakes happen.

The danger is that you’ll compound that first mistake by making a second one: not letting go of the employee that isn’t cutting it.

I haven’t always acted quickly enough on this. In those instances, I’ve wondered why I waited so long when I, ultimately, took action.

In many cases, after firing a particularly caustic employee, I’ve had others literally say to me, “What took so long?” That’s not a good feeling.

Terminating people is hard, but there’s a lot of truth to the adage that parting ways is almost always good for both parties.

To avoid this mistake, listen to other leaders around you; they’ll often be the first to let you know you have a problem. And they will help hold you accountable if you don’t act decisively.

Mistake 3: Focusing on the wrong thing

Leaders, no matter the scope of their responsibility, will have many things coming at them throughout the day, but it’s not all worthy of their time.

More critically, it’s easy to slip into the mode of wanting to spend time on the projects that align with your interests and skills.

Unfortunately, that alignment isn’t necessarily a good gauge of what you should spend your time on.

How do you avoid this mistake?

Spend time clarifying at the organizational level what your priorities are.

At my organization, Harvard Business School Online, we use a tool developed in manufacturing called Hoshin Kanri to plan our strategic priorities and initiatives at the beginning of each year.

Those priorities and initiatives get put into order by importance. This prioritization method helps the entire management team focus on the initiatives that will help us meet our goals.

Mistake 4: Believing all success is because of you

Nobody does it alone. Managers who believe that every success their organization has achieved is solely because of them are not the sort of leader Collins discusses.

Recognizing that success is because of your team is not only right, but it has the added benefit of making those around you more engaged — making you even more successful.

It’s counter-intuitive, but not claiming success for yourself will lead to more future wins.

One way to avoid this mistake is to ensure that you regularly and publicly thank others for their efforts.

At HBS Online, we have regular all-staff meetings where “recognition cards” are read by me in front of the entire team.

Recognition cards are filled out by members of HBS Online, recognizing the great work of their colleagues. Reading them allows me to reflect on those efforts and thank individuals publicly myself.

Mistake 5: Trying to do it all yourself

This one fits closely with the fourth mistake; it’s not possible to do it all yourself, which is why you can’t claim all the credit.

If a manager feels compelled to do everything, two things will happen:

People like to make decisions and carry out tasks themselves. Good leaders recognize this and turn their staff loose.

Avoiding this mistake is a matter of asking yourself every day:

Mistake 6: Not admitting when you’re wrong

Everybody makes mistakes, but not everybody admits when they make them.

It’s my belief that great leaders are comfortable doing precisely that — acknowledging mistakes and apologizing to those who get impacted.

No matter what you do, others will know when you messed up.

So, ignoring it won’t make it go away. It’s better to address the error head-on.

The best way to ensure you don’t make this mistake is to practice reviewing at the end of each week decisions you made that were controversial or didn’t lead to an outcome you expected.

Recognizing such instances is the first step toward identifying where you might have been wrong about something. Then, it’s time to suck it up and apologize.

Mistake 7: Thinking of employees as assets, not people 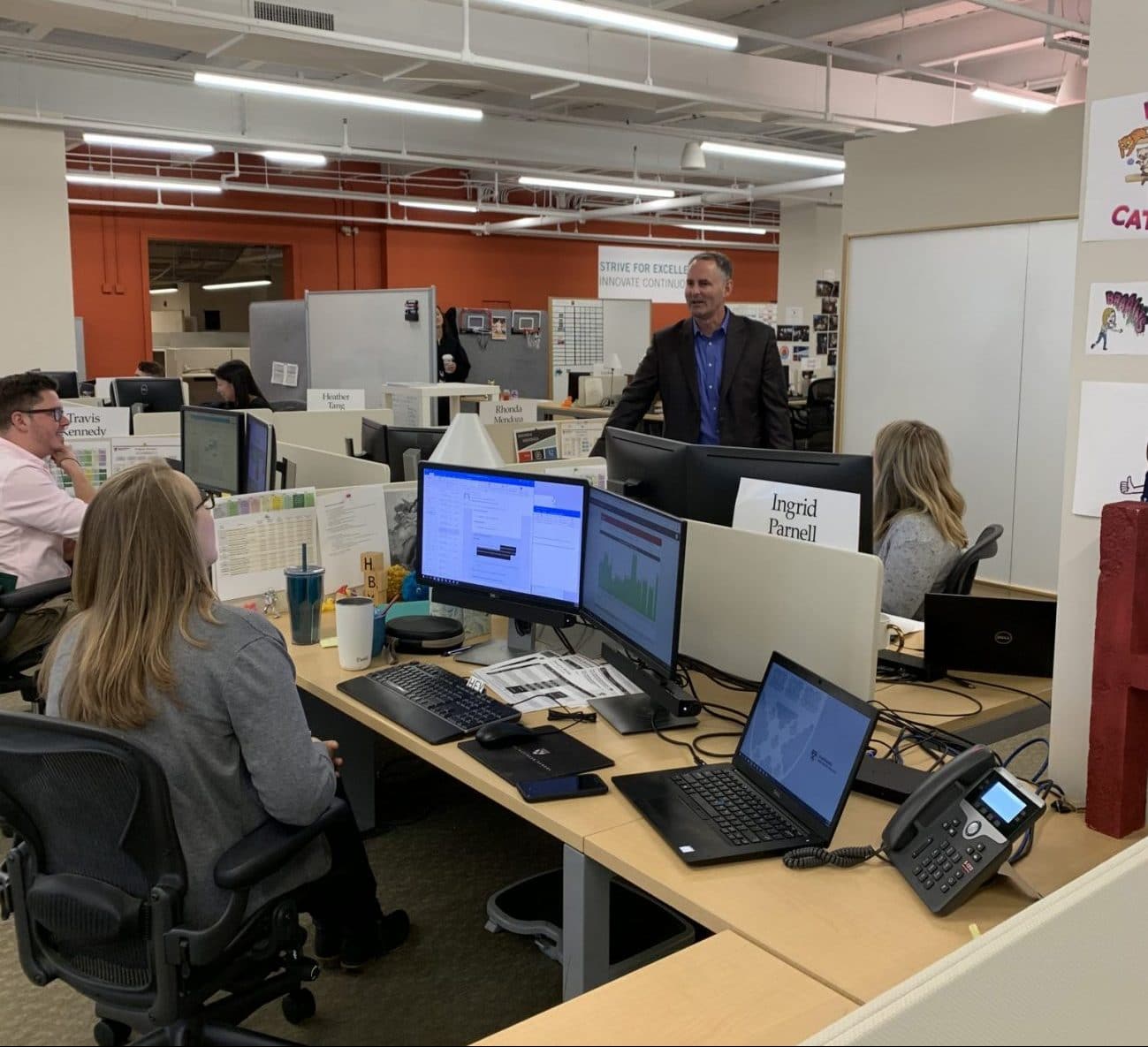 I was once sitting in an airport when a woman approached me with some sort of hand-out.

I clammed up, not wanting to have a conversation with somebody trying to sell something.

Sure enough, she was passing out a pamphlet on finding enlightenment.

During our brief exchange, she swept her arm across the assembled masses and said, “Don’t forget, everybody you see right now has dreams, regrets, struggles, successes, insecurities, worries, sadness, happiness, and loss. There is more to them than what you see.”

She walked away and, truth be told, I was happy to return to the book I was reading. But later, on the plane, I thought more about what she said.

She was right. And as a leader, it can be easy to forget that those on your team have lives beyond what you see at work.

Good leaders recognize this and see the humanity in those they lead.

Avoid the trap of thinking of people as assets to be employed instead of human beings to be valued.

Being even slightly vulnerable is a way to show your humanity, which will help them expose more of theirs.

By sharing a bit about your lives outside of work, a better and more fulfilling working relationship will follow.

Mistake 8: Forgetting to “manage up”

Unless you’re an entrepreneur who’s never taken outside investment, you have a boss. You may like your boss, or you may hate them. (For the record, I like mine!)

No matter your relationship, it’s critical that you “manage up.”

What does that mean?

It means keeping your boss informed, helping them understand the issues you’re working on, and ensuring that they won’t be surprised by anything you’ve touched that comes their way.

I’ve made the mistake of not doing this, and it never ends well.

Avoiding this mistake is relatively easy.

First of all, communicate regularly. If your boss doesn’t arrange for regular meetings, ask for them. If he or she can’t take the meetings, use email to provide updates.

Clarify with your boss the times that it’s OK for you to “go it alone” when making an important decision and when they want you to reach out for help.

Mistake 9: Being secretive when it’s not necessary

In the absence of regular, honest, and open communication, rumor and innuendo will fill the void. Be sure to have a bias toward sharing with your staff whenever possible.

While there are things that must be held in confidence — more often than not, that list is exceptionally short.

Don’t fall into the trap of feeling important because you’ve hoarded information.

Most people can tell when this is what you’re doing, and the secrecy is unnecessary. It invites mistrust and skepticism, making it hard to rely on those you need to excel.

After all, if you can’t trust them, why should they trust you?

Avoid this mistake by having regular meetings where Q&A is part of the program.

Be open to any question, and be honest when you can’t answer. Otherwise, be as transparent as you can.

Mistake 10: Not being social

You are human, too, and being at the top can be lonely. Don’t make it worse by holing up in your office, thinking big thoughts and doing big things.

Go out with the rest of your team. Attend off-hour social events. Participate in office parties. Walk the building and check-in with folks.

While your staff will appreciate it, you’ll be amazed at how much you will learn and grow from those interactions.

You will find out about the challenges and successes your team is experiencing and can help them work through pressing problems. It will help relieve stress, and almost always ensure a good laugh.

You will make mistakes. We all do.

The measure of a good leader is how he or she reacts to those mistakes and learns from them.

It’s my hope that you can learn from those listed here. As Eleanor Roosevelt said, “Learn from the mistakes of others. You can’t live long enough to make them all yourself.”